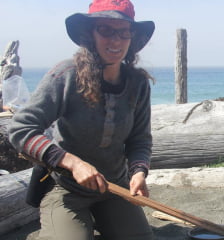 Fiona Hamersley Chambers is an ethnobotanist whose research focuses on traditional foods and how northwest coast First Peoples managed and co-evolved with their plant resources. Her PhD work on B.C.’s Central Coast, working collaboratively with the Heiltsuk First Nation and supervised by renowned ethnobotanist Dr. Nancy J Turner, investigates how key berry plants were cultivated and owned in ‘gardens’. The importance of these species, which were historically significant in terms of food, culture, trade and landscape management, today has not been fully acknowledged or studied. Her goal is to define the features of a traditional berry garden, understand how these were created and managed, then scientifically test the efficacy of traditional management methods in controlled experiments. Ultimately, the hope is for this applied research to act as a link between traditional knowledge and practice and the needs of First Nations communities today. Fiona is a long-time organic farmer and commercial seed grower specializing in food plants and soft fruit production. She has lectured at UVic since 1999 and also teaches at Pacific Rim College, BMSC, Royal Roads University and through UVic’s Continuing Studies Department. She grew up in the First Nations communities of Nitnaht Lake (Clo-oose) and Penelakut (formerly Kuper) Island, where she maintains close ties. Her love of the outdoors, plants and nature began at an early age, while homesteading with her family in the bush in what is now Pacific Rim National Park Reserve, travelling abroad, and extended visits with her farming family in the UK countryside. Fiona holds an MA from the University of Victoria (French and Environmental Studies), an MSc from Oxford (Environmental Change and Management), and a Masters in Environmental Design from the University of Calgary. She has authored or co-authored numerous field guides, including Wild Berries of BC, Edible and Medicinal Plants of Canada, and Wild Berries of Ontario. She owns and operates Metchosin Farm, a small organic operation on Southern Vancouver Island specializing in heritage and locally-adapted seeds as well as a wide variety of soft fruits. Fiona breeds and selects new food plant varieties, has introduced 2 new tomatoes, and 2 apple varieties to the commercial market (‘Metchosin’ and ‘Hakai’). She is currently working on developing a number of blight-resistant new potato varieties specifically selected for the moist BC coastal climate and growing conditions. She lectures extensively to elementary, high school and community groups about native plant uses and stewardship, and very much enjoys her teaching time in Bamfield.