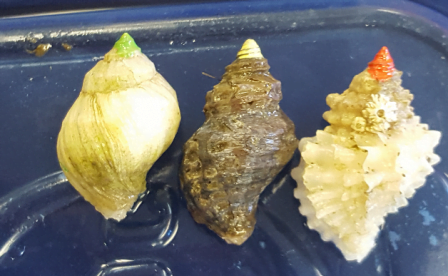 Although the frilled dogwinkle (Nucella lamellosa) is a well-studied intertidal snail, questions have remained regarding the purpose of some variations in shell form found commonly in individuals of this species. The function of axial lamellae, an external shell structure giving some individuals of this species a frilled appearance, has remained a mystery. As a part of the Fall Program at the Bamfield Marine Sciences Centre in 2015, undergraduate students Owen Newson and Rokzanna Basi conducted a Directed Studies research project attempting to solve this mystery. Under the guidance of instructors Tao Eastham, Erin Hornell, and Dr. Richard Palmer, Owen and Rokzanna conducted a series of feeding trials to determine whether this type of shell sculpture might reduce vulnerability to sea star predation. The data collected during this project showed that N. lamellosa bearing axial lamellae were eaten significantly less than N. lamellosa with naturally smooth or artificially smoothed shells by the ochre star (Pisaster ochraceus), a common intertidal predatory sea star. Encouraged to pursue publication by instructors and classmates, Owen and Rokzanna collaborated with Dr. Palmer to publish these results this past summer, contributing a valuable missing piece to the ongoing story about adaptive phenotypic plasticity in the shell form of this snail, and suggesting a possible reason for the importance of this type of shell sculpture in other snails.