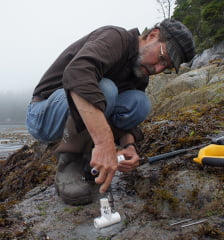 I have broad interests in the comparative morphology, functional morphology/biomechanics, development and evolution of marine invertebrates.  Over nearly four decades of research at BMSC my students and I have made a number of eyebrow-raising discoveries about how marine animals change their form — sometimes quite dramatically — when grown in different environments, a phenomenon known phenotypic plasticity.  We discovered that a) intertidal snails grow more predator-resistant shells when they smell predatory crabs, b) crabs grow more robust claws when they feed on hard-shelled prey, c) starfish change shape and increase attachment strength when transplanted to more wave-exposed shores, and d) barnacles double the length of their feeding legs to better capture plankton (and also grow longer penises!) when transplanted from wave-exposed shores to a quiet water harbour.  Most recently we reconstructed the evolutionary history of spectacular snapping claws in shrimp and obtained the first ultra-high speed videos of snapping claws in amphipods.  On a grander scale, my work on left-right asymmetries in animals has shown that genes are commonly followers, rather than leaders, in the evolution of novel forms of organisms.

I have taught/co-taught the Animal Structure & Function course in the BMSC Fall Program ever since the Fall Program was started in 1996.  I was also Director of BMSC 2007-2008.