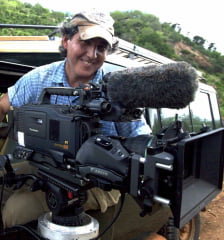 In his 25 year wildlife filmmaking career he has crafted intimate portrayals of many intriguing wild characters, from elephants, crocodiles, leopards and bears to spiders, pigeons, termites and leeches. Jeff especially loves revealing the remarkable lives of underappreciated and misunderstood creatures. Surprisingly, they are often key to the survival of a healthy ecosystem.

“Each film is an incredible education for me, working with innovative scientists and talented filmmakers to experience the lives of remarkable animals from a very privileged perspective – the animals’ own world. The biggest prize is sharing this experience with the viewers.”

Jeff’s innovative portrayals of wild characters have revealed the compelling worlds of creatures large and small for National Geographic, Discovery, CBC, Animal Planet, the BBC and The Nature Conservancy. While a staff producer-director at National Geographic Television Jeff’s films garnered four National Emmy awards and ten National Emmy nominations. He has recently completed a landmark series for The Smithsonian Channel chronicling America’s wildlife through the seasons and has worked as cinematographer, director and producer for a variety award-winning documentaries for CBC’s The Nature of Things, including The Wild Canadian Year, For the Love of Elephants, The Secret Life of Owls and Sonic Magic: The Science and Wonder of Sound.

Whether following moose families through the Alaskan bush, chronicling rancher’s battling insect armies in Texas, or revealing the secrets of the giant hornet in Japan, Jeff Morales brings a creative and playful style to natural history films.

Jeff is also passionate about teaching researchers and students how to tell their own compelling science and natural history stories and conducts university seminars and workshops across North America. A former street musician, Jeff has busked the squares and alleyways of Paris, Rome, Key West, Los Angeles and Kathmandu. His kids are not impressed by his fashion sense.